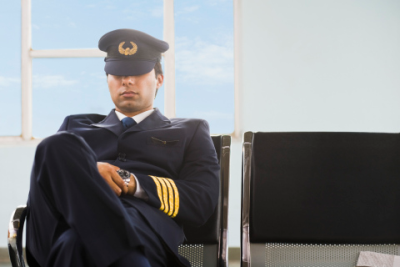 Fatigue is the general term used to describe physical and/or mental weariness which extends beyond normal tiredness.

Physical fatigue concerns the inability to exert force with one’s muscles to the degree that would be expected. It may be overall tiredness of the whole body or be confined to particular muscle groups. Physical fatigue most commonly results from physical exercise or loss of sleep. Physical fatigue often leads to mental fatigue.

Mental fatigue, which may include sleepiness, concerns a general decrease in attention and ability to perform complex, or even quite simple tasks with customary efficiency. Mental fatigue often results from the loss or interruption of the normal sleep pattern and is therefore of great concern to pilots and ATCOs, who are frequently required to work early in the morning or at night.

Sleep patterns are naturally associated with the body’s circadian rhythms. Shift patterns and transit across time zones can interrupt circadian rhythms so that, for example, it may be difficult for flight crew or pilots on duty in the early hours of the morning or flight crew operating long-haul routes through multiple time zones to achieve satisfactory rest prior to commencing duty.

In a pilot, fatigue may manifest itself by:

Take a look at Skybrary’s Fatigue webpage for further information and a list of fatigue-related accidents.

The European Commission has now completed the necessary legislative processes to harmonise FTL under Subpart-FTL. Commission Regulation (EU) No. 83/2014 was entered into the EU Official Journal on 29 January 2014. The supporting EASA Decision material – Guidance Material (GM) and Acceptable Means of Compliance (AMC) – has also been published. The Regulation is applicable since 18 February 2016 and all affected operators must have transitioned to compliance with the new rules by that date.

It’s not always easy to find all relevant documents relevant to the new FTL regulations, that’s why we have summarized the reference documents below:

Note: By way of derogation from the requirements of Commission Regulation (EU) No. 83/2014, air taxi, emergency medical services and single pilot operations will continue to be subject to the requirements under Regulation (EEC) No. 3922/91 and Subpart Q of Annex III (EC No 859/2008) to Regulation (EEC) No. 3922/91 and to related national exemptions based on safety risk assessments carried out by the competent authorities. Commercial Air Transport (CAT) operations with helicopters shall continue to comply with national regulations.

Historically, the aviation industry has taken a regulatory approach to fatigue prevention through the specification of flight and duty time limitations in a Flight Time Limitations (FTL) Scheme. This is done by limiting the number of hours aircrew can work and specifying the minimum rest time which is required before the commencement of each flight duty period. The purpose of an FRMS is to support the safe application of such FTL Schemes by recognising the need for aircrew be adequately rested before commencing and during flying duties by facilitating both proactive and reactive interventions in relation to the implementation of FTL Schemes.

It has been recognised through research that there are a number of causes of fatigue including:

A fatigue risk management system allows operators to effectively utilise their FTL Scheme whilst taking into account the above effects. Fatigue models are may be used to proactively. Demonstrated safety benefits have included increased crew member alertness, better work-life balance amongst crews and a reduction in absenteeism attributed to fatigue. In addition to this, an FRMS may facilitate increased productivity and rostering flexibility.